Around the Mountain: Caves in Tennessee 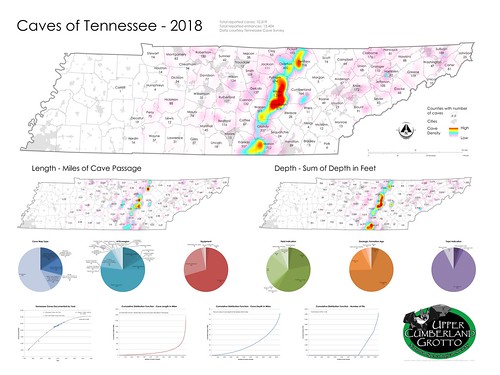 Were you aware there are over 10K known caves in Tennessee?  In fact, Tennessee boasts the highest number of caves in the U.S. with the majority running right down the middle of the state.  For a natural earth cavity to qualify and be listed as a cave on the Tennessee Cave Survey database it must meet or exceed the following measurements: horizontal length 50ft., total vertical extent of 40ft., or a pit depth of 30ft.  Cumberland Caverns exceeds these guidelines and is ranked among the largest caves in the world, boasting rooms larger than Mammoth and more miles than the beautiful Carlsbad Caverns.

What is a cave?

A cave is a natural void under the earth’s surface, and most caves are formed in soluble rock, usually limestone.  Solution caves are formed over millions of years when rock is slowly dissolved by slightly acidic water.  Terrains that show evidence of solution caves, such as sinkholes and springs, are called Karst. Cumberland Caverns is known as a solution cave and was formed by two underground rivers.  When these two rivers converged, creating a whirlpool, they carved out what is now known as the ‘Volcano Room.’ Evidence of this can be seen in the beautifully sculpted ceiling that covers the great hall.

Why do we need to protect our cave systems?

The importance of cave preservation is monumental for our environment and history. Karst regions are bountiful in the most beneficial spring water, rare animals, and minerals not found anywhere else on earth. Research done in caves also provides scientist with valuable insight into the geological and climate change of the area. Caves also preserve fragile archaeological and paleontological materials for millennia.

Cumberland Caverns is committed to cave conservation and preservation through commercialization and are thrilled to be able to share this amazing experience with all of you. We know you’re going to love this adventure, and miracle of nature, as much as we do.

Thank you, Chuck Sutherland, for allowing us to use your great cave map of Tennessee.